We encourage you to purchase a plate on your next visit to the DMV. The cost is $30 (plus normal tag fee). Donate Life South Carolina receives 85% of the proceeds of this cost to help promote organ and tissue donation and to assist transplant patients across South Carolina. 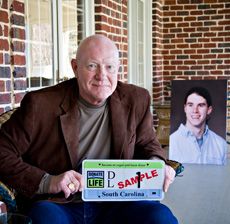 Thad Billings was one of those people who would light up a room with his bright smile and great attitude. He was a pleasure to be around, loved to have fun, cared deeply about giving, truly enjoyed life, and was a star athlete. He loved soccer, swimming, basketball, and football.

On Memorial Day 1994 Thad was in a tragic car accident in which he sustained massive brain injuries. He was pronounced dead shortly after his family arrived. The next morning a LifePoint counselor approached Thad’s parents about donating Thad’s organs. His dad, Ed, recalled, “When Thad had obtained his driver’s license in high school; he told me he had checked to become an organ donor.”

Because of the decision to donate, Thad’s heart, kidneys, liver, pancreas and corneas were recovered for transplantation. Five people’s lives were saved and two more people benefited from improved vision. For Ed Billings, the silver lining of his son’s tragic death was the knowledge that his son touched the lives of so many people through donation.

The Billings feel a lot of satisfaction and pride knowing so many lives were saved. Ed has made it his mission to help spread awareness about organ and tissue donation in honor of his son. With his son as inspiration, Ed spearheaded the effort to create the first Donate Life license plate for South Carolina.

He explains, “My goal is if it inspires one person to make the decision [to donate]…that is enough for me. It’s such a simple thing to do, but at the same time, it is so heroic.”

What can YOU make possible?